NORTH CAROLINA (October 15, 2020) — A new oyster reef project by Audubon North Carolina is helping restore bird and fish habitat and improve water quality on the Lower Cape Fear River. Work is now complete on the first $300,000 phase of the project, constructed at Shellbed Island near the mouth of the river.

Oyster reefs provide a critical food source for birds while also helping to sustain important nesting habitat—onshore shell rakes. Rakes are banks of old oyster shells that wash ashore once the mollusk dies. These shell formations can be found throughout the Lower Cape Fear River and are used by birds like American Oystercatchers to nest and raise their young.

But the habitat that oysters support on the river—from reefs to rakes—has suffered as oyster populations plummeted in recent decades, contributing to a decline in water quality and depleting the source of shells that would typically replenish shell rakes. By restoring oyster reefs, Audubon is ensuring birds and all kinds of wildlife continue to have a home on the river.

“Oysters are amazing creatures because they support entire webs of life, from birds to fish to local communities. Building oyster reefs is one of the best ways to restore ecosystems in a way that mimics nature,” says Curtis Smalling, director of conservation at Audubon North Carolina.

Shellbed Island is part of a network of bird sanctuaries on the river that Audubon protects and manages for nesting waterbirds—species like American Oystercatchers, Royal Terns, and Brown Pelicans. Audubon’s larger network of coastal sanctuaries, including barrier island habitat, provides a home to 40 percent of the state’s coastal nesting birds. 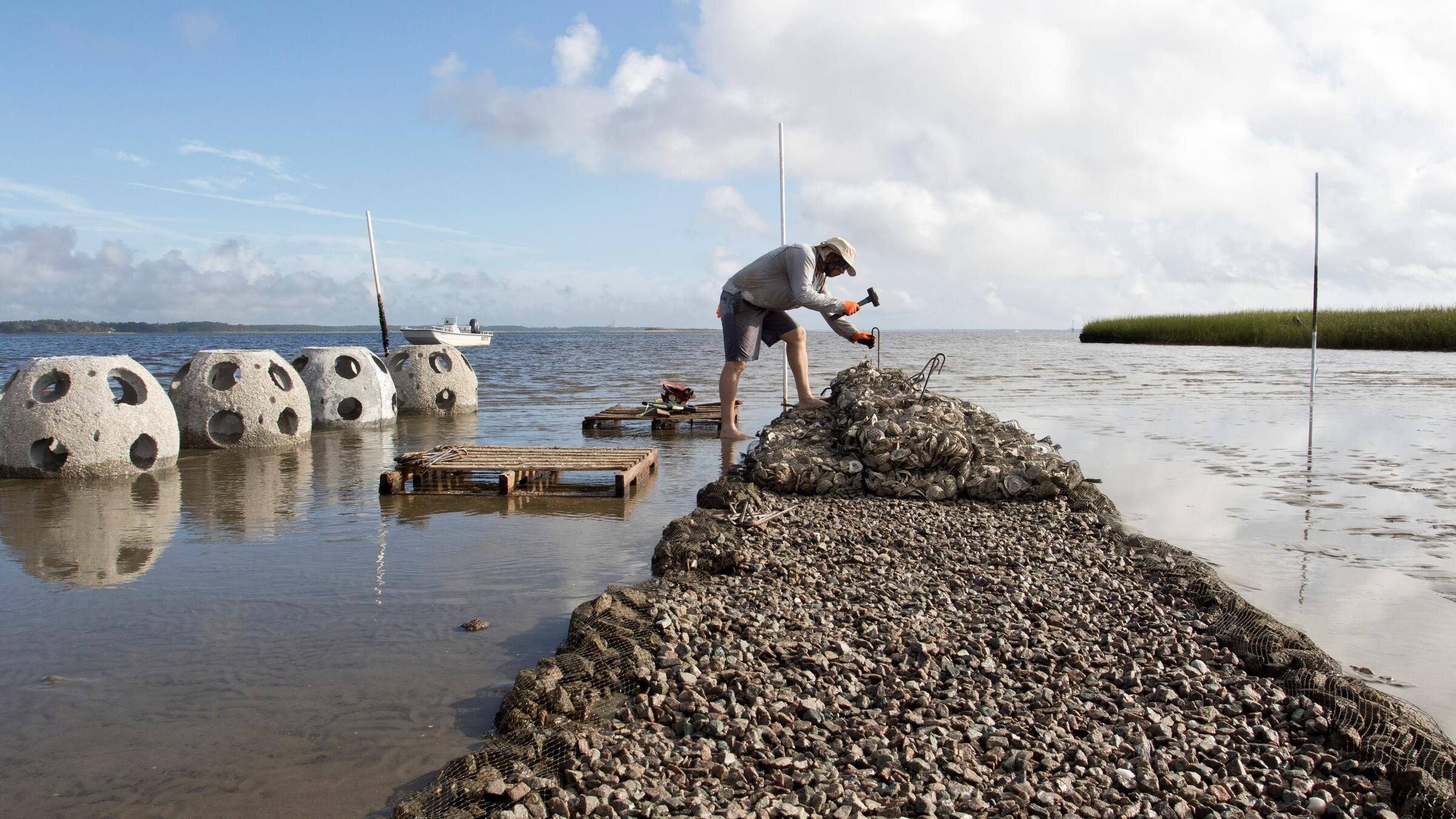 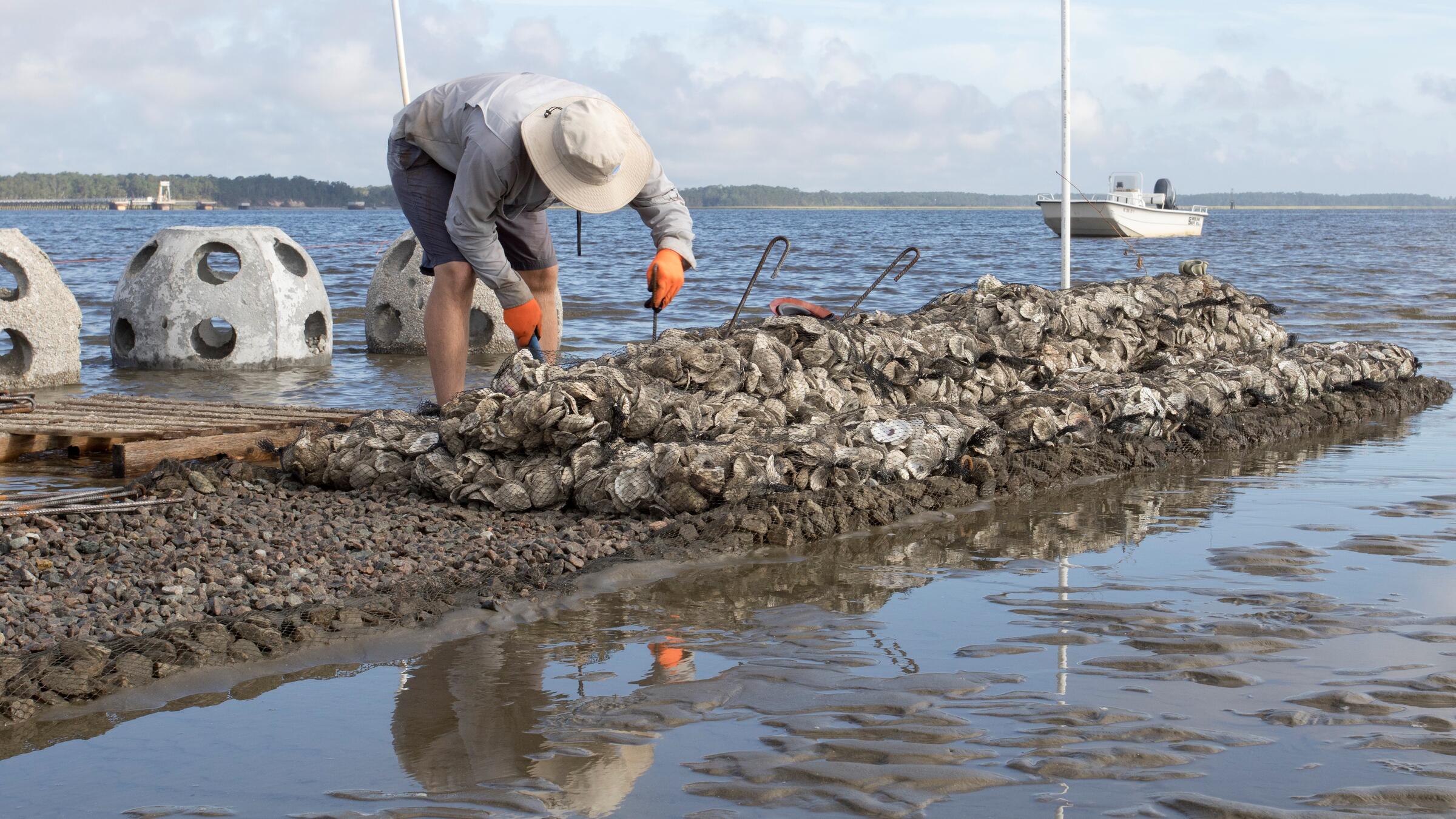 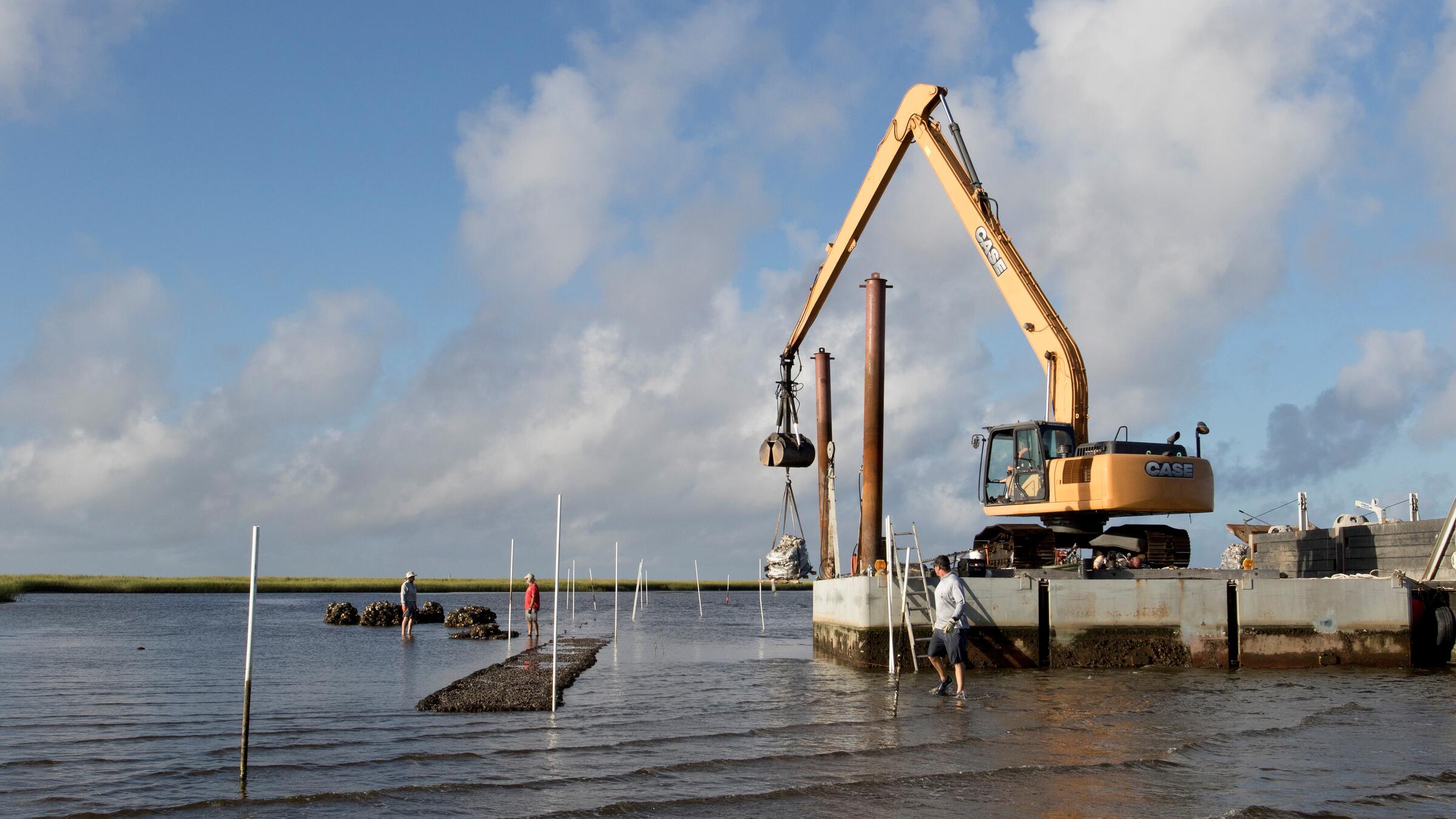 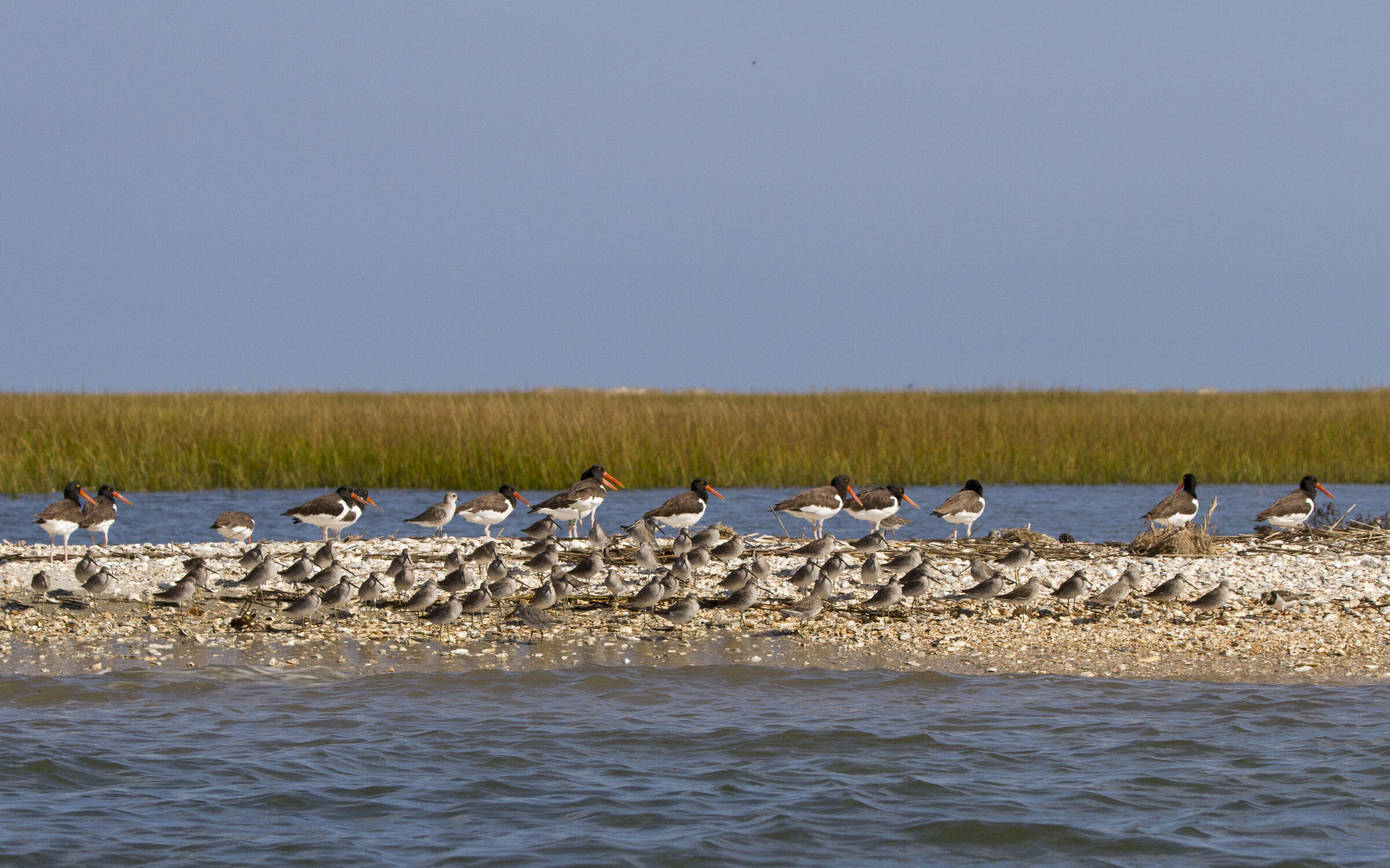 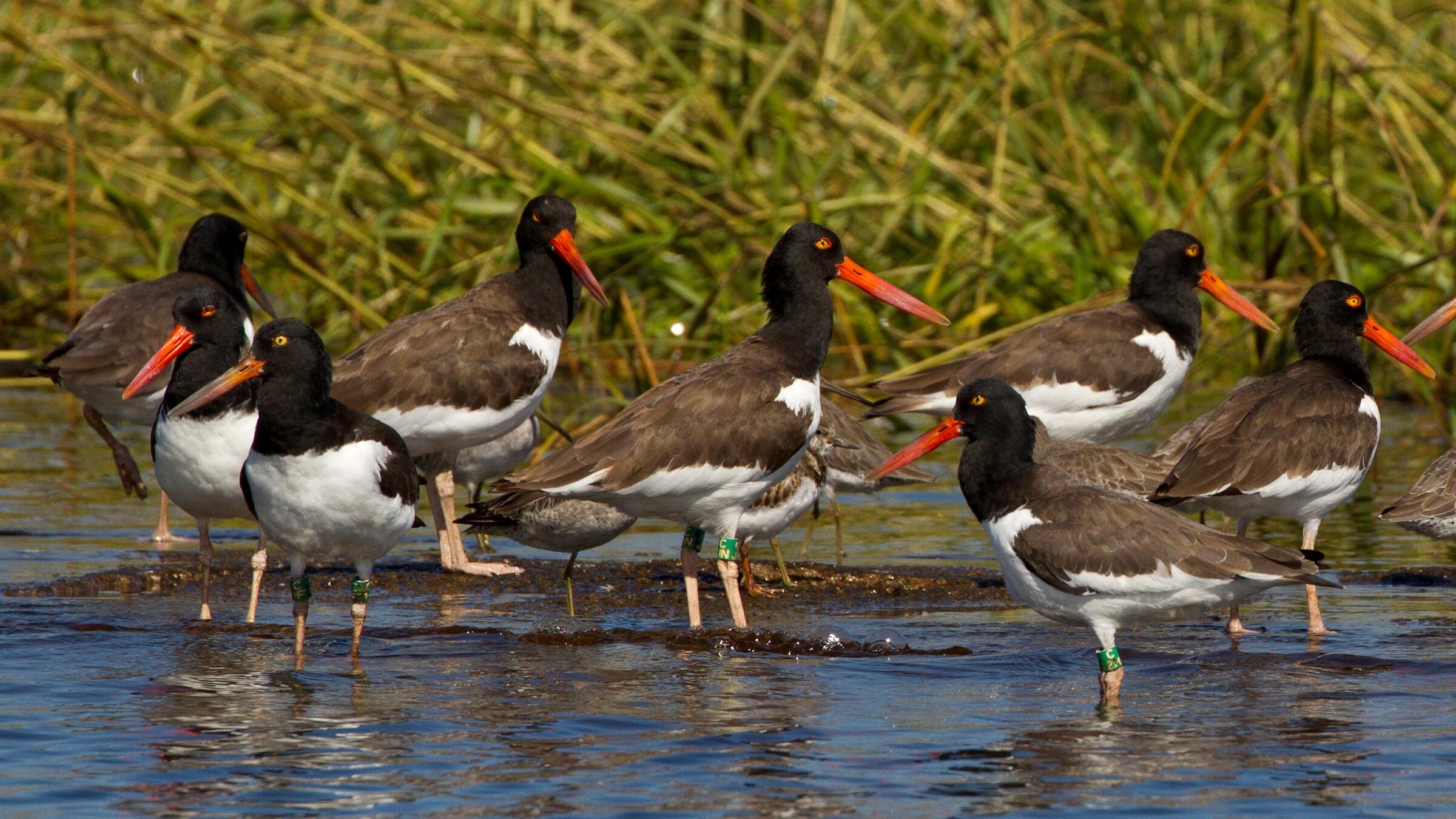 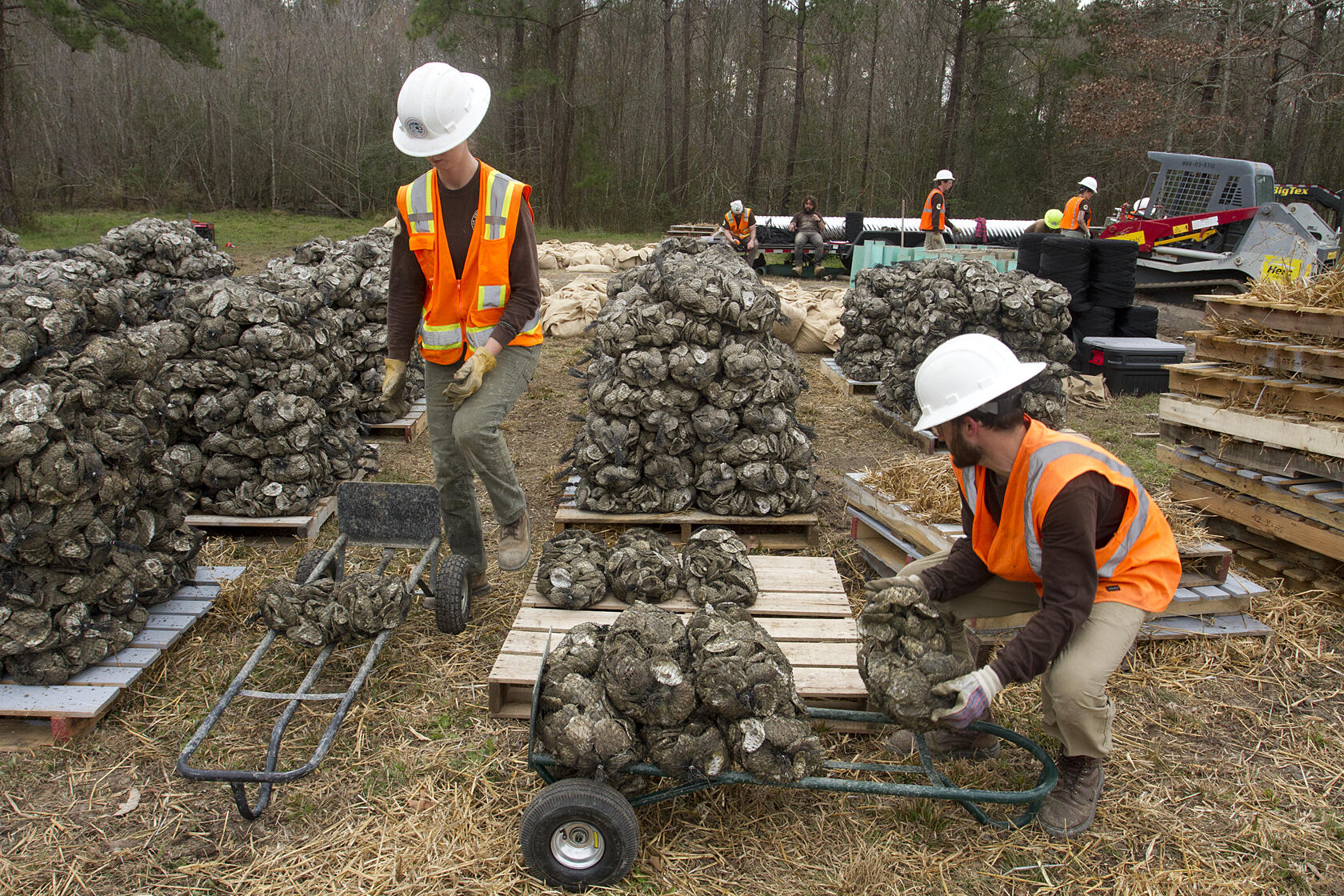 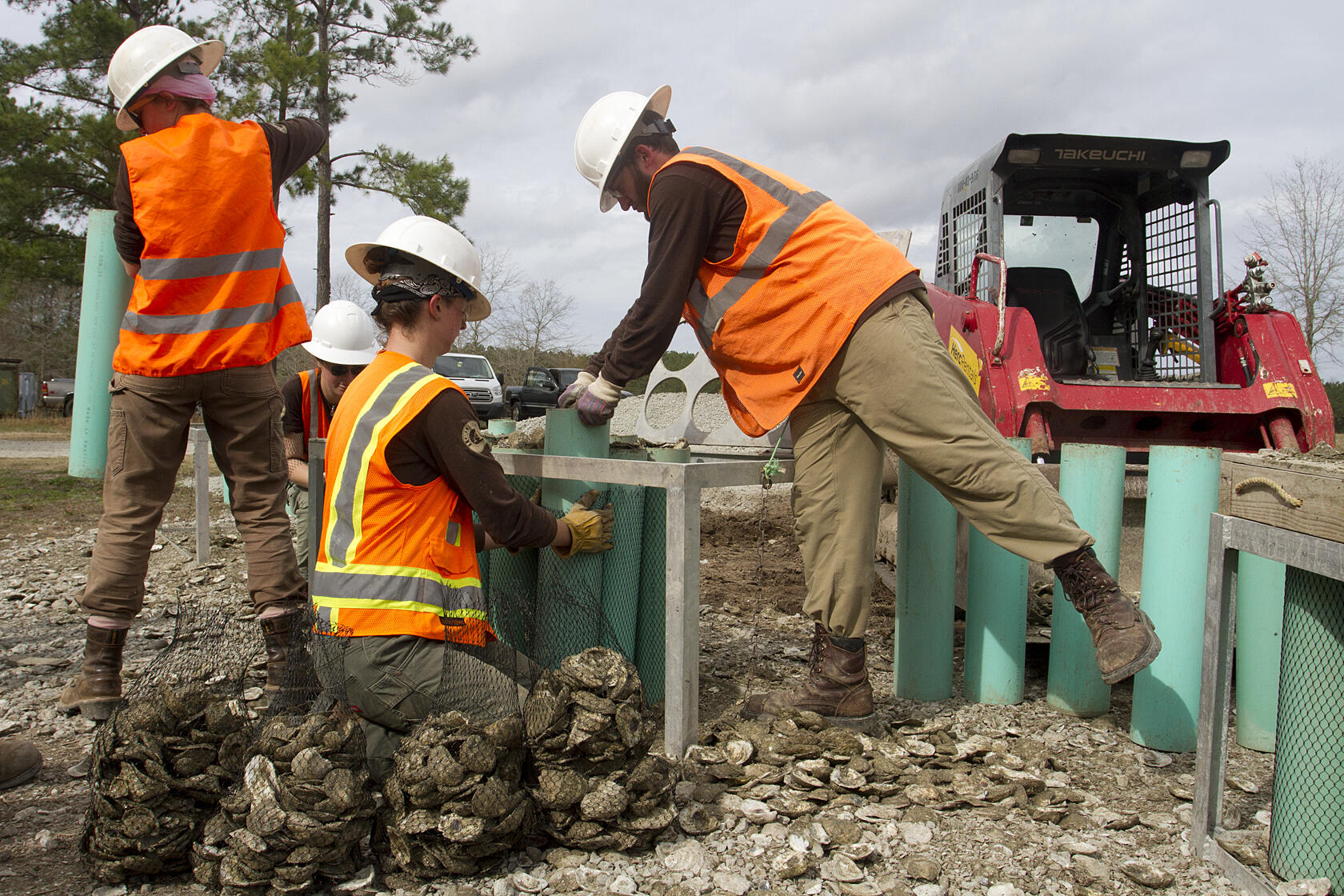 Crews worked over the winter to prep oyster shells for the reef project. Photo: Lindsay Addison/Audubon 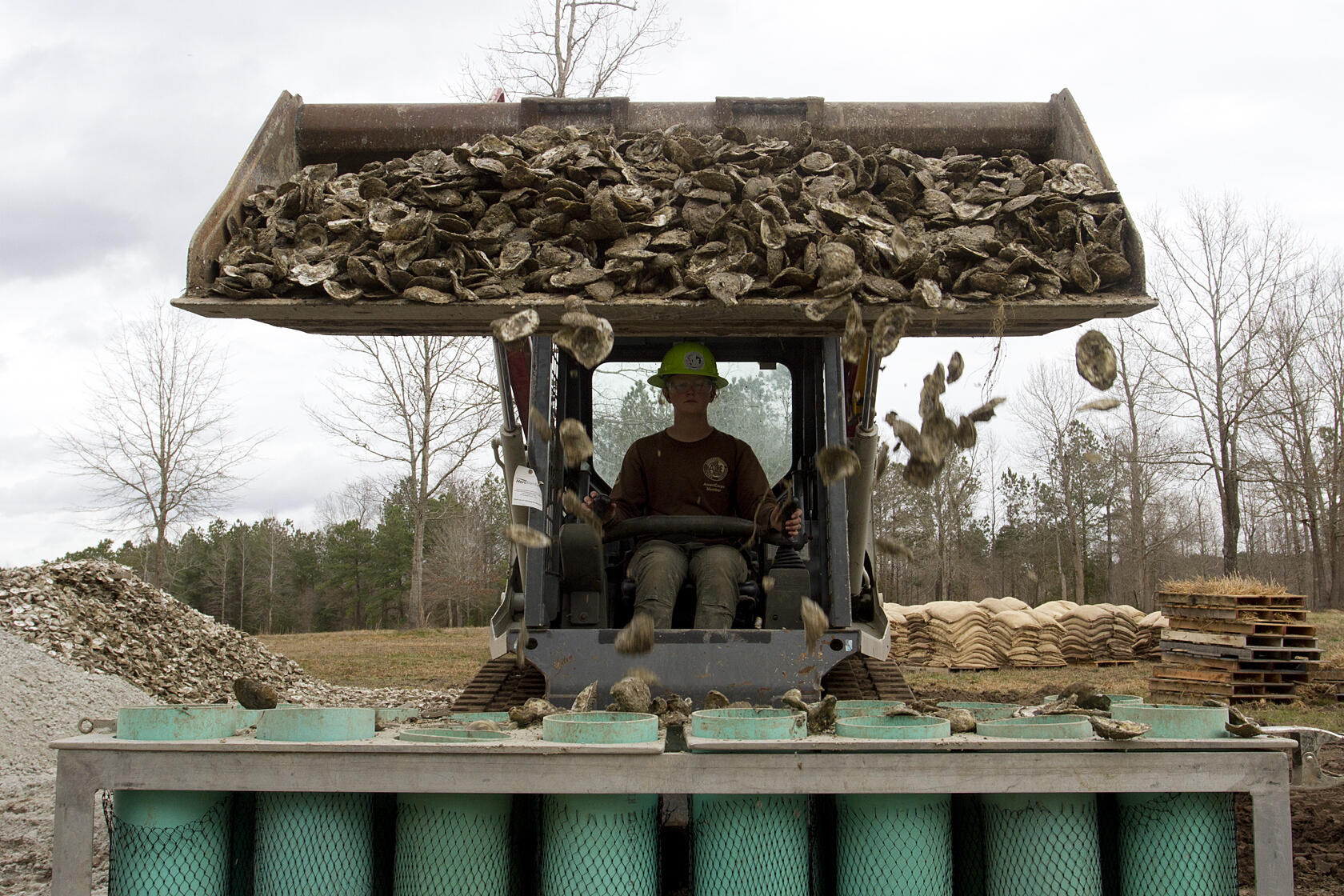 The new oyster reef at Shellbed Island consists of 140 concrete reef balls and 2,600 oyster bags, forming three 160-foot-long sills that will become part of the intertidal ecosystem, meaning the reef will be exposed at low tide but submerged at high tide.

Adult oysters are sedentary creatures and filter water—up to 50 gallons a day for a single oyster. In their larval stage, oysters drift through the water until they attach themselves to a hard surface, like other oyster shells. New oysters will begin growing on the reef in as soon as a year.

In the short-term, the reef will provide foraging grounds for oystercatchers and habitat for fish and a wide variety of other marine organisms. In the long-term, the new reef will help sustain the nesting rakes on the island and others nearby.

American Oystercatchers in particular will benefit. One hundred breeding pairs live on the Lower Cape Fear River, a quarter of the state’s entire population. These gaudy black-and-white birds, with their long, bright red bills and yellow eyes, are familiar sights to beachgoers, but they depend on oysters and their shells for food and nesting habitat.

Declines in oyster populations on the Cape Fear have put American Oystercatchers in a precarious position. Fewer oyster reefs means fewer shells available to build up rakes over time. Lower shell rakes leave their eggs and chicks more susceptible to boat wakes and king tides that wash away their nests. Overwash is the leading cause of nest failure for American Oystercatchers on the river.

“American Oystercatchers have a special relationship with their namesake mollusk—they depend on oysters and their shells for food and a safe place to raise their chicks. The reef project will help ensure these special birds flourish on the Cape Fear River,” says Lindsay Addison, coastal biologist at Audubon North Carolina.

This is Audubon’s first oyster reef project on the Lower Cape Fear. In 2012, in partnership with the North Carolina Coastal Federation, the first oyster project at an Audubon site was a living shoreline installed at Beacon Island at Ocracoke Inlet. Locations for the Cape Fear River oyster reefs were selected by a mapping and site assessment process that identified physical habitat components that would be most likely to support healthy oyster reefs.

Three additional reefs are permitted and designed for the river but await funding.

The new Shellbed Island oyster reef was funded through the National Fish and Wildlife Foundation by the North Carolina and Virginia Rivers and Waters Program.

The National Audubon Society protects birds and the places they need, today and tomorrow. A nonprofit conservation organization since 1905, Audubon works throughout the Americas using science, advocacy, education, and on-the-ground conservation. Learn more at www.audubon.org and on Facebook, Twitter and Instagram @audubonsociety.

Audubon North Carolina, a state program of the National Audubon Society, has offices in Durham, Boone, Corolla, and Wilmington. Learn more at www.nc.audubon.org and on Twitter, Facebook, and Instagram.​