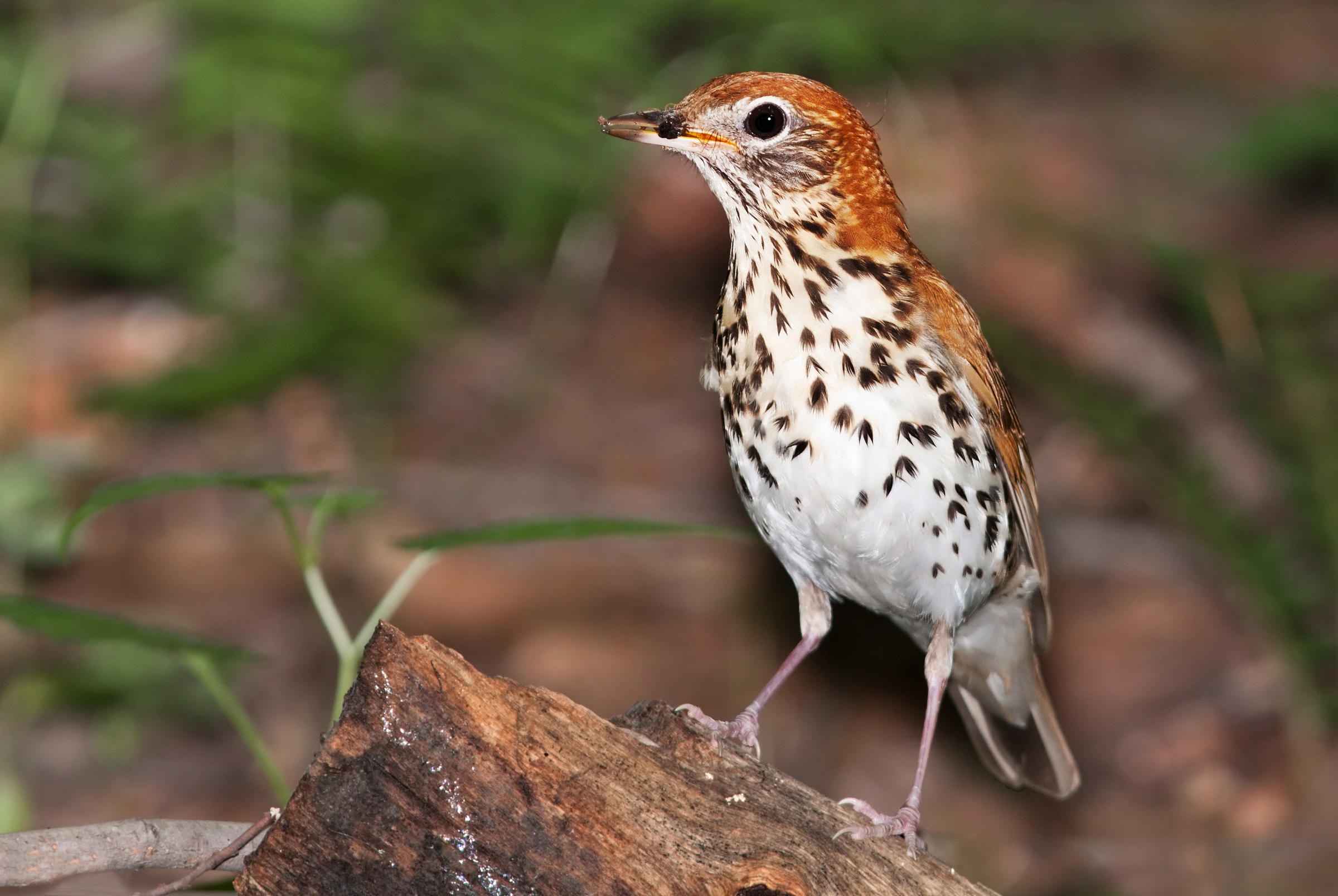 As its population has declined nearly 40 percent, the Wood Thrush has been designated a priority for conservation within our global and state IBAs.
Wood Thrush Photo: Kelly Colgan Azar/FlickrCC
Priority Birds

As its population has declined nearly 40 percent, the Wood Thrush has been designated a priority for conservation within our global and state IBAs.

One of our most widespread migratory birds, the Wood Thrush spends its life making epic journeys between the tropics and the Eastern US, but little is known about the links between specific breeding and wintering populations of this beloved bird. As its population has declined nearly 40 percent, the Wood Thrush has been designated a priority for conservation within our global and state IBAs.

Wood Thrushes have unique physical characteristics including a defining feature: bold brown spots on its white chest and brown feathers on the back. The unique coloring gives it the ability to camouflage with its surroundings. The coloring serves the Wood Thrush well, as they tend to have anxious personalities and are always on alert for predators. Despite their medium sized build of 8” in length, Wood Thrush are hard to spot in the wild because of their reclusive nature.

Known for its distinct song, a male Wood Thrush can sing out of both sides of its voice box, essentially singing a duet with itself. Females usually attempt to raise two broods during one season. In its life span of up to 8 years, a female can mother dozens of offspring.

Each year, the Wood Thrush makes its migration from wintering grounds in Central America to its breeding grounds along the East Coast of North America, with many of its habitats located here in North Carolina. However, the Wood Thrush’s population has decreased by 50 percent in the last four decades, which has made it the second-most rapidly declining songbird in North America. Habitats along their migration route are being devastated by fragmentation, pollution and invasive species. Closer to home, they are at risk for nest predation and window collisions.

From Nicaragua to North Carolina

Since 2007, Audubon North Carolina under the direction of Curtis Smalling and many conservation partners have set out to discover why migratory songbird populations are steadily declining. Because significant loss of habitat is contributing to the decline, researchers have relied on Important Bird Areas to piece together the puzzle, finding links between Nicaragua and North Carolina.

With 96 IBAs and suitable breeding habitat, North Carolina is a draw to many birds like the Wood Thrush, and Smalling is working to understand their behaviors at wintering grounds and how these two regions are equally supporting this bird population. Through years of partnerships, trainings and a mutual love of birds, Nicaragua’s Reserva El Jaguar has become a key conservation partner for Audubon NC and the work to save our songbirds. A valuable connection with the natural reserve in Nicaragua, El Jaguar is a private family-run farm that produces high-quality, sustainable coffee that supports the community and the surrounding ecosystem. And with miles of shady, shrubby habitats serving as a winter home to diverse birds and wildlife, the farm has been designated an Important Bird Area by BirdLife International.

Audubon NC volunteers and partners have worked with owners Lili and Georges Duriaux, training the community in bird banding, observing and collecting data, and utilizing eBird to create a data resource for Central America’s birds. Because of the trainings, many birds like the Wood Thrush and Golden-winged Warbler have been banded at El Jaguar during their winter stop.

A Wood Thrush banded in the wintering grounds made history when it was recovered in Pennsylvania during the breeding season, a breakthrough for migration data collection. Out of thousands of birds to be banded, this was the first time a bird was documented at both wintering and breeding points, and researchers were able to download the data from an active geolocator.

Through his work in Nicaragua, Smalling has fostered a community of bird conservationists, taught local business owners how to benefit from birding and eco-tourism, trained individuals to collect, verify and submit data to eBird and developed a growing program that has now identified 33 IBAs throughout Central America. El Jaguar even participates in the annual Christmas Bird Count, having recorded more than 200 species to date.

By working with the Nicaraguan community and El Jaguar, Audubon NC is well on the way to developing a more complete understanding of the lifecycle of the Wood Thrush, resulting in a growing international partnership, a better understanding of migrating songbirds and a clear plan to make a positive impact on protecting birds and their habitats on a global scale.

With data collection along the Wood Thrush migration path becoming such a valuable resource for furthering habitat protection and the IBA program, Winston-Salem’s Forsyth Audubon Chapter has joined the Wood Thrush Project, a partnership with Audubon’s International Alliances Program and scientists from the Smithsonian Institution in a project to capture and tag birds with GPS locator tags and bands in two breeding locations in the piedmont region, the Pilot Mountain State Park IBA and Historic Bethabara Park. The local event resulted in 22 birds tagged in 2014. Two similar events were held with Bedford Audubon Society in New York and St. Croix National Scenic Riverway in Minnesota to fill in more gaps in our knowledge of Wood Thrush migratory connections.

How You Can Help

Audubon has many programs in place to help the Wood Thrush population thrive, and it’s easy to get involved in your own neighborhood.

To find out more about how you can get involved with conservation to protect the Wood Thrush and IBAs across our state, visit the Audubon NC blog.

Through a national climate study, Audubon has identified the Wood Thrush as a climate threatened bird. Learn more here.