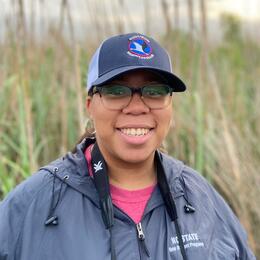 Many of us are just settling into the slower rhythms of summer, but for Audubon North Carolina’s biologists and volunteers, the season has been heating up for months. They have spent long, hot days under the sun, patrolling our shoreline, monitoring nesting birds, and launching exciting new research.

“We’ve had big crowds at the beach this summer. Fortunately, we’ve also had big numbers of nesting birds,” said Lindsay Addison, coastal biologist at Audubon North Carolina. “People and their dogs can coexist with these birds, as long as humans remember to keep their distance. The beach is the only place that many of these species can raise their chicks.”

If parent birds are forced to flush from their eggs or babies, it only takes a few minutes for them to bake in the sun.

Beach Bird Stewards are back at the south end of Wrightsville Beach and helping with this cause by educating visitors. You can help spread the word using our #ShareTheShore toolkit.

Protecting these birds also requires understanding how they use their habitat now and figuring out what they might need in the future. Audubon biologists are asking these questions through a variety of research projects, from years-long banding work to new research on the fine scale movements of American Oystercatchers.

Read on for a full coastal nesting season update.

The sanctuary at the south end of Wrightsville Beach is home to a large flock of Black Skimmers, also known as the “toucans of the beach” because of their large, colorful bills. Last year, the sanctuary hosted the largest skimmer colony in the state.

Audubon biologists and Beach Bird Stewards report that the skimmer colony has 166 pairs, and many were successful with their first nesting attempt.

Some of these birds are familiar faces. We know this thanks to a banding program by Audubon biologists. Banded birds are recognizable because of a metal or plastic band that researchers clasp comfortably around their legs. Within the colony at the south end of Wrightsville, 27 skimmers have been banded so far this year. Since beginning three years ago, the program has banded over 200 skimmers.

Around a dozen previously banded birds returned to the colony this season, an exciting finding for Addison and her team. “We do not expect them to start nesting until they reach three years, but we are excited to see their movement and this is why we band them—in hopes to see them later,” Addison said.

Least-Hutaff Island is consistently home to the largest numbers of Least Terns in North Carolina, and this summer is no different. We’re still tallying the numbers, but Addison predicts the island will again be one of the most important sites for Least Terns in North Carolina. Another important Least Tern site is the south end of Wrightsville Beach, where a new challenge faced the terns.

Many of the chicks are fledging—the stage after hatching when birds learn to fly. But being a baby bird is tough, and not all chicks are able to make it to the fledgling stage. Raccoons, coyotes, and even ghost crabs are their predators during nesting season. However, this summer the terns on Wrightsville Beach faced an abnormal threat from a hungry group of Gull-billed Terns.

Gull-Billed Terns have short stout bills that allow them to pursue diverse food, including crabs and small terrestrial animals (most terns have sharp pointy beaks and hunt fish). In this case, they’ve been preying on baby Least Terns. The Gull-billed Terns did not return after gulping down most the first wave of Least Tern hatchling. But the Least Terns didn’t give up, and most renested. Addison remains positive for the remainder of the nesting season and the majority of second-wave tern chicks are fledging.

On the Cape Fear River, Battery Island is home to a huge flock of White Ibis, just as it is most years. But this spring and summer was the first time that Brown Pelicans nested on the island, located across the river from the Southport waterfront. Fledging is starting, but many of the pelicans are still growing up perched in the island’s yaupon and cedar trees.

The White Ibis and other wading bird species on the island are doing well and their chicks are departing, Addison reports. Often adults can be seen winging away from the island chased by a begging newly fledged juvenile. While they compete with each other for nesting spots, they also have not been displaced from Battery by the pelicans.

Big Numbers of Egrets and Pelicans on Pamlico Sound

Audubon protects and manages a series of bird nesting islands in Pamlico Sound, the furthest north of all our coastal sanctuaries. On Beacon Island, visible from Ocracoke Island on a dead calm day, a healthy population of pelicans and Great Egret and Brown Pelicans are also nesting. They have already weathered some brush-bys from several tropical storms, even though it’s early in the Atlantic hurricane season. With luck, the remaining chicks at Audubon sanctuaries will dodge additional threats and, like many before them in 2021, survive to fledge.