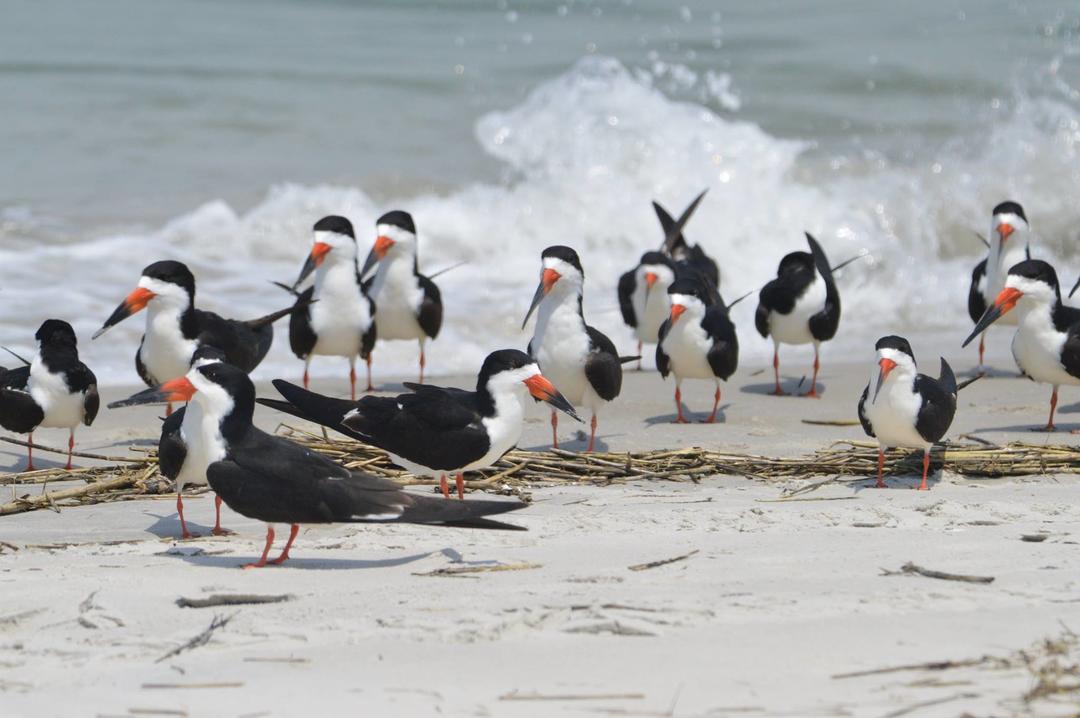 Black Skimmers are often remarked upon for their graceful, acrobatic flight, but they are also unusual birds for several reasons...

Black Skimmers have large, vertical pupils, which they need in order to forage at night, and protect their retinas from bright sand and reflections off the water during the day. They are the only birds in the world with this kind of mechanism!

The skimmer is also one of the only birds to have a lower mandible that is longer than its upper mandible. This enables the skimming behavior that earned them their name.

They forage by skimming the surface of the water, and whenever their lower mandible comes into contact with prey—usually small fish—their bill snaps shut. Because they hunt primarily by touch, they often forage at dawn and dusk and even in the nighttime!

Learn where to find them, how to help them, and more in this Priority Bird Profile: Black Skimmer.

Why does this bird matter?

Black Skimmers are a climate-endangered bird whose colonies are particularly vulnerable to storm surges and sea level rise. Like terns and oystercatchers, skimmers nest on the ground on open sandy beaches and sandbars, creating a shallow scrape in the sand to incubate their eggs. Their nesting populations are in decline in the southeast, including in North Carolina where 2017’s census found a decline from 842 pairs in 2014 to 498 in 2017.

They are also vulnerable to human disturbance, especially to nesting colonies during the spring and summer and to resting flocks during the fall and winter months. Like all coastal birds, habitat loss due to development and engineering projects is also a concern.

At first glance, the Black Skimmer has similar coloring to the American Oystercatcher, with black upperparts and white belly and a bright orange bill with a black black tip. But unlike the oystercatcher, they have short orange legs instead of long pink ones. Observers may do a double-take as a skimmer’s black eyes seem to blend right in to their black caps!

Skimmers nest on beaches, inlets and on some dredged-material islands throughout the state. Since 2009, the south end of Wrightsville Beach (at Masonboro Inlet) has been home to a large colony of Black Skimmers. Another readily accessible summer spot to view them is Pea Island National Wildlife Refuge.

During fall migration (which for skimmers begins in August), flocks of Black Skimmers gather by the thousands at inlets around the state as they prepare to move farther south. Most will be gone by Thanksgiving. Most of these individuals are likely moving south from nesting sites in the mid-Atlantic region. The shoals at the Rachel Carson Reserve, part of the National Estuarine Research Reserve System, is an excellent site to view them, as are New Topsail, Rich, and Mason Inlets.

How is Audubon helping this bird?

Then, every summer, Audubon North Carolina recruits volunteers to educate beachgoers about Black Skimmers (amongst other) beach-nesting birds on the south end of Wrightsville Beach. These “Wrightsville Beach Bird Stewards” show visitors newborn chicks in spotting scopes, and educate them on beach bird habits, habitats and how to help protect the many species that make our beaches their summer home.

The colony that the bird stewards help protect is regularly one of the largest in the state, with as many as 36% of North Carolina’s nesting skimmers. We also work to protect natural inlets throughout the state, which provide the best-quality habitat for migrating skimmers and other coastal birds.

Coastal birds require clean, safe coastal habitats to migrate, nest and feed during critical points in their annual cycle, so it’s important that we are taking care of their homes.

Birds can be very loyal to the places they visit during each phase of their life-cycle. The same bird can re-visit the same habitat each year for nesting, foraging, migration and wintering. Keeping important nesting, migration, and wintering sites free from human disturbance and in a natural state is important to their survival.

Here are some easy ways you can help Black Skimmers, as well as other coastal birds.