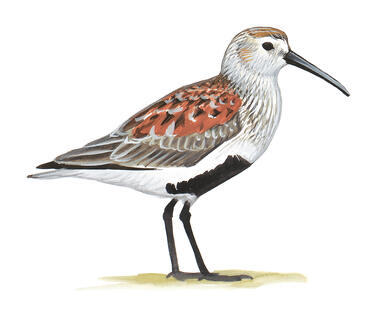 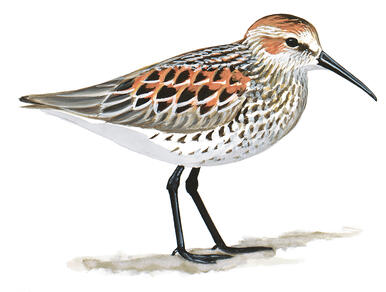 Learn about the bird conservation research taking place at the Donal C. O'Brien Sanctuary and find nature-focused events happening at this Important Bird Area along the Outer Banks in our periodic eBulletin. 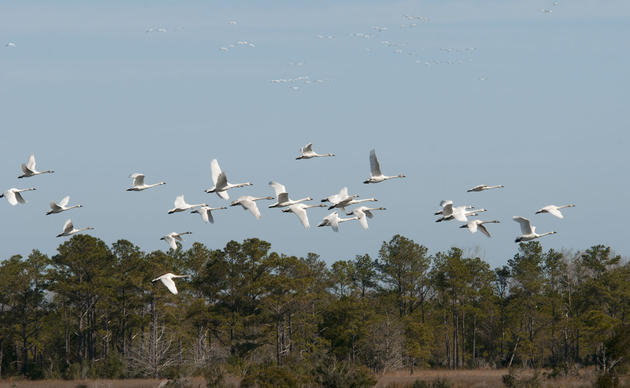 Leaves are changing colors, the weather is getting chillier and North Carolina’s coastal birds are preparing for a change in scenery too! While this fall brings bird migration departures, many new arrivals are starting to appear along our coast. So, grab your binoculars and take a trip over to the beach to see your favorite birds.

These small, active birds can be spotted at any beach in North Carolina running back and forth in the surf, probing the sand like tiny sewing machines. They begin to arrive in July, like many shorebirds, and spend the next month or two molting out of their bright orangey-black breeding plumage into the sand-colored winter garb that matches their beachy homes. Sanderlings leave in the spring on their northbound migration, heading for the Arctic where many shorebirds nest.

One of the coast’s newest additions this October will be the droop-billed Dunlin. A late arrival on the coast, most Dunlin leave their high Artic nesting grounds to stage around Hudson and James Bays. While there, they molt out of their bright winter plumage into the gray-brown that give them their name. It’s this stop that delays their arrival in our state. Its populations will peak over the winter at inlets across the North Carolina coast and by early May most will be northbound again.

The distinct whistles of the Black-bellied Plover can be heard at coastal inlets starting in July. When they arrive, they may still be in their breeding plumage that resembles a reverse tuxedo—hence their name. As fall progresses they will don more subtle, but still beautiful, winter dress that blends in better with sand flats where they roost and forage.

The Western Sandpiper can be spotted in the fall at coastal inlets, on sandbars and mudflats. Their populations are especially large between September and October when migrating flocks are passing through. Early migrants will still sport black speckles on the sides of their bellies and rufous backs, remnants of their breeding plumage.

Though they are more numerous during spring migration, the canny birdwatcher can still spot Red Knots on the North Carolina coast beginning in August as they pass through at places like Fort Fisher State Recreation Area, Cape Point at Cape Hatteras National Seashore, and Cape Lookout National Seashore. Small flocks will stay for the winter, but don’t expect to see their red bellies though, not until the spring when they molt into breeding plumage!

With black crowns on their heads, Royal Terns rule over the inlets of North Carolina, especially in August and September. They leave their kingdoms to migrate to Florida, the Caribbean and South America in October to avoid North Carolina's chilly winters.

Black Skimmers are known for their large, orange bills. Beginning in August, they can be found at Mason, Rich and Topsail Inlets along the North Carolina coast and over the fall, flocks grow to over 1,000. Viewing is limited, as they are nearly all gone by Thanksgiving.

North Carolina coastal inlets will be losing Wilson's Plover to Florida and South America in September for its winter migration. These large-billed plovers are solitary nesters, but during migration they will gather in flocks of 50 or more.

The large, long-beaked and chicken-legged American Oystercatcher is hard to miss. Starting in August, they begin to gather in flocks that can be found around the coast, at such birding hotspots as Rachel Carson Reserve, the rocks at Fort Fisher, and Masonboro Island.

This small, pale shorebird with an adorably small beak is found year-round at North Carolina's beaches and inlets. In the fall, though, migrating flocks boost numbers, especially at places like the south end of Ocracoke Island Rich Inlet, and Sunset Beach.

When you are out spotting this season, always remember to share the beach. Click to learn how Audubon North Carolina is working to protect our coastal birds all year-round.