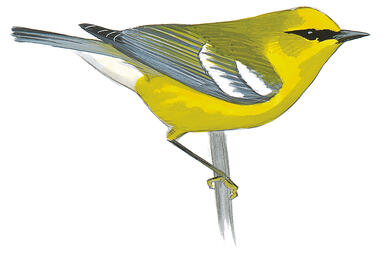 Included on Audubon North Carolina’s list of priority bird species, the Golden-winged Warbler has suffered one of the steepest population declines of any songbird species in the past 45 years.

Curtis Smalling has worked for several years and authored or co-authored 25 scientific papers on the Golden-winged Warbler. He is a member of the Golden-winged Warbler Working Group, which is a consortium of researchers who provide the essential data needed to determine the status and risks to the species. Those risks are taken into consideration by the US Fish and Wildlife Service when evaluating this warbler for status and protections as an endangered species.

The Cornell Lab and partners in the Golden-winged Warbler Working Group have a conservation plan to stop the decline and grow the population 50 percent by the year 2050.

The Golden-winged Warbler already fits many of the criteria to be included on the Endangered Species List and receive federal protections. Its traditional habitats are facing loss and destruction, leaving the breeding range split into two distinct regions. Up to 95 percent of the population can be found in the Upper Great Lakes (mostly Wisconsin, Minnesota, and Manitoba) and the other five percent in the Appalachians from New York to Georgia.

Is the species’ habitat or range facing destruction, modification or curtailment? Golden-winged Warblers prefer early successional habitat to nest and raise their chicks in the higher elevations of the Appalachians. With the evolution of farming and land management practices, this habitat is dwindling making it difficult for Golden-winged Warblers to sustain healthy populations on their own.

Are there other natural or manmade factors affecting the species’ survival? Bird species like the Golden-winged Warbler rely on early successional habitat and show some of the steepest population declines. Because this specialized habitat requires consistent management to keep it from growing into a mature forest, early successional forest habitat continues to decline in the East.

Up to 1,000 Golden-wings breed in North Carolina each summer, and established land management of early successional habitat can help the species continue. Click here to learn about Audubon NC’s land management programs and efforts to engage private landowners in habitat restoration efforts.

An Urgent Need for Protection

Clear-cutting, burning and grazing can improve habitat for Golden-winged Warblers, although new evidence points to the importance of keeping mature forest nearby.

Overall, populations have declined 76 percent over the past fifty years — so they now have one of the smallest populations of any bird species not already added to the Endangered Species List. They rate a 15 out of 20 on the Continental Concern Score and are included in the 2014 State of the Birds Watch List, which lists species most in danger of extinction without significant conservation action.

Efforts to protect the Golden-winged Warbler rely heavily on data collection to show scientifically that the population decline exists. ANC scientists are collaborating with research partners to collect and merge Golden-Winged Warbler survey data from many sources and protocols, so that we can determine historical shifts in its population even more accurately in N.C.

The more data we have, the better we can understand how to focus our efforts to make the biggest impact on recovering the Southern Appalachian population of the Golden-winged Warbler.

One of our resources for bird data comes from eBird, a citizen science database collecting bird sightings from people just like you!

This data is very important. Without it, our researchers cannot cover as much ground as we would like. Incidental sightings of the Golden-winged Warblers can make a big difference in where we focus our future land management efforts and where we go next to restore the habitats this bird needs to thrive.

Right now, the Golden-winged Warbler’s ranking is high enough that it receives research funding from various organizations that believe there is a chance of reversing the species’ steep population decline.

Audubon NC is working on projects—like the Putting Working Lands to Work for Birds and People program—to help make its habitat needs more widely known to land managers, who might not otherwise know how to manage for them.

There’s so much you can do to contribute to the conservation of this priority species.

Learn more about the Golden-winged Warbler and its priority status on our website.