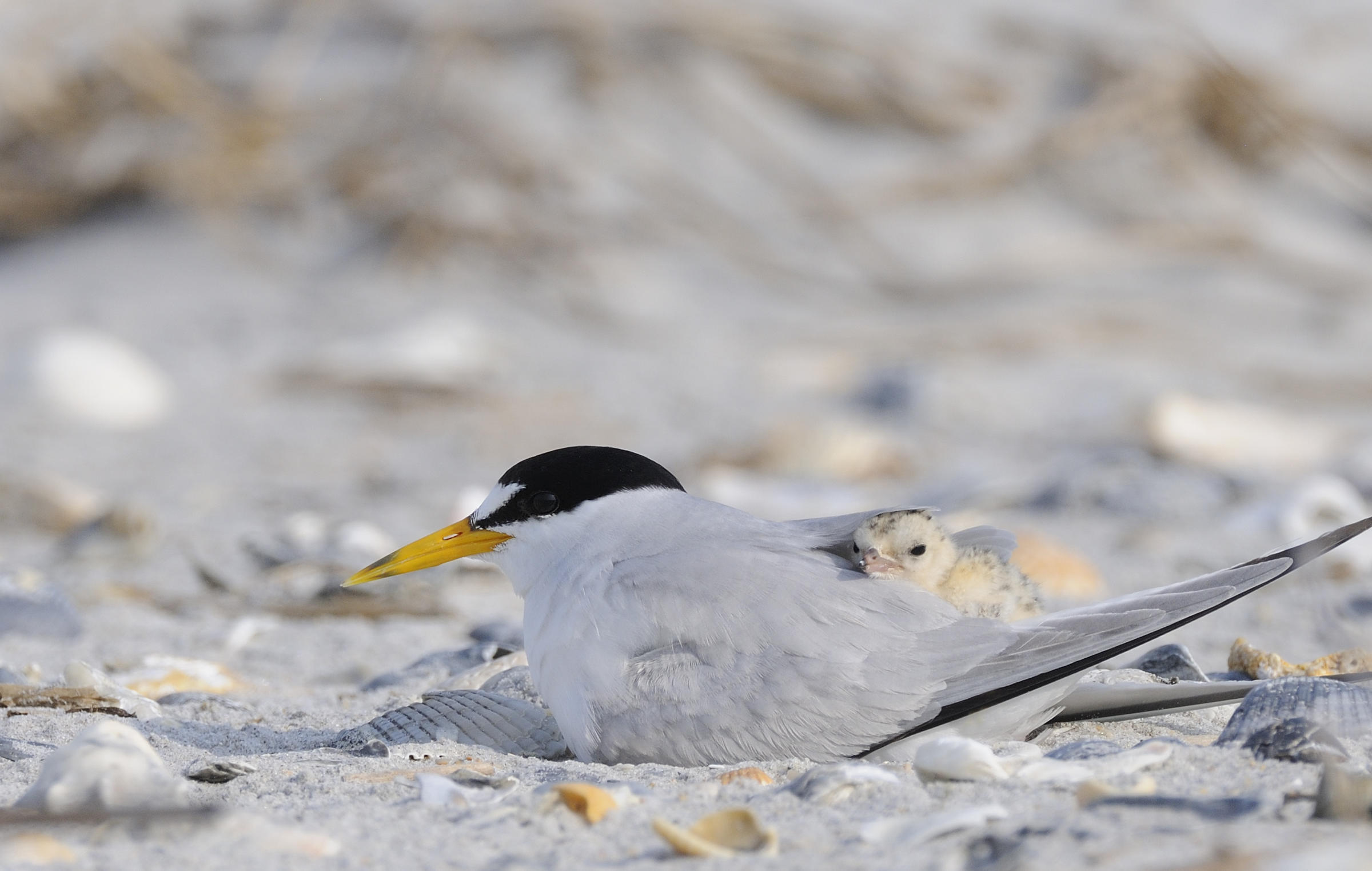 Colloquially known as the “little striker” for its headlong dives in pursuit of fish, the Least Tern is, as its name suggests, North America’s smallest tern.

Colloquially known as the “little striker” for its headlong dives in pursuit of fish, the Least Tern is, as its name suggests, North America’s smallest tern.

Colloquially known as the “little striker” for its headlong dives in pursuit of fish, the Least Tern is, as its name suggests, North America’s smallest tern. Its small size—not quite the size of a robin—yellow bill, and triangular white patch on its forehead distinguish it from other terns found in North Carolina.

Least Terns winter in the Caribbean and South America, and nest in North Carolina during the spring and summer months. They prefer to nest on open sand, including beaches, dredge material islands, and sometimes, on gravel-covered rooftops that look like a beach to a tern. Favorite nesting sites in North Carolina, however, are near inlets, which provide excellent nesting habitat and plentiful baitfish prey. Like other terns, Least Terns are colonial: they nest in groups. When threatened by a predator or a human intruder, the entire group mobs the danger, calling, swooping and defecating to drive it away.

At the turn of the last century, the Least Tern was nearly extirpated from North Carolina and the rest of its Atlantic coast range due to market hunting. Like herons and egrets, terns and shorebirds were also targets of the millinery (hat-making) trade. Following the passage of the Migratory Bird Treaty Act and the cessation of the hunting that had threatened its existence, the species rebounded. T. Gilbert Person, one of the Audubon Society’s founding fathers, and others surveyed the North Carolina Coast in 1939 and found that as many as 25,000 Least Terns were “thriving splendidly.”

Today some 2,000-3,000 pairs nest in North Carolina. Though they are no longer hunted, Least Terns have experienced a second population decline as their preferred nesting habitat—beaches—are also prized by humans. Disturbance at nesting sites due to recreational use, as well as outright habitat loss from development and coastal engineering projects, are the threats faced now. Due to this vulnerability, they are a species of special concern in North Carolina. Signs and string mark most nesting areas in North Carolina, showing beach-goers how to avoid disturbing nesting birds and their young.

Important Bird Areas (IBAs) designate areas that are critical to bird populations in North Carolina. The following IBAs are important to Least Terns as nesting sites. Sites with an asterisk indicate an Audubon-managed site.

Audubon North Carolina’s staff and volunteers are working to protect Least Terns nesting on our beaches. Learn more about our conservation work for the Least Tern on the NC Audubon Blog!