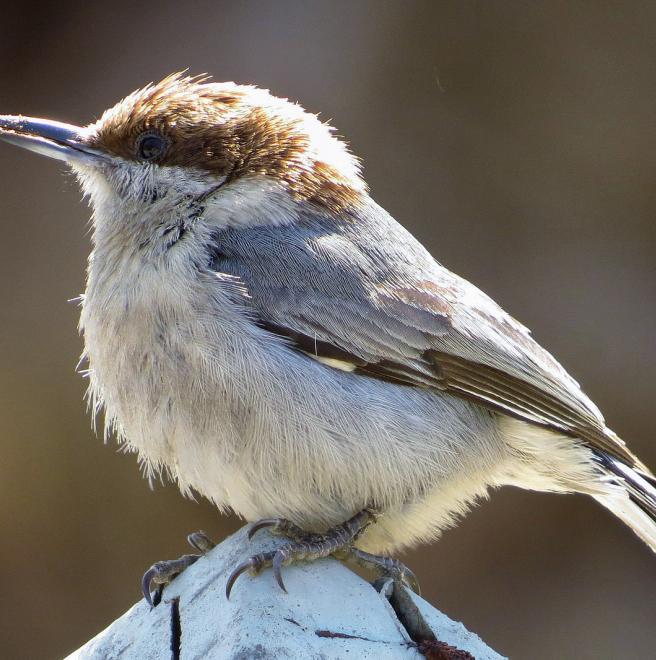 The Brown-headed Nuthatch is fondly known to Audubon North Carolina (ANC) as our quintessential southern bird.

The Brown-headed Nuthatch is fondly known to Audubon North Carolina (ANC) as our quintessential southern bird. Smaller than a sparrow, this tiny nuthatch is just under 4” long - and sounds more like a rubber ducky than a real bird. You can spot a nuthatch by its blue-gray back, brown crown, and whitish underbelly and nape.

Its home range is from Virginia to east Texas, and it can be found in many areas of the piedmont and coastal plain, living in old growth pine and urban forests. Nuthatches live in family groups with their grown fledglings (mostly male birds) sticking around to help out with the next generation.

The Brown-headed Nuthatch is a high-priority species for conservation in the piedmont region. Nuthatch populations have declined because of habitat loss through deforestation and urbanization.

Although a significant population decline has been seen in the Brown-headed Nuthatch, Audubon North Carolina is leading a campaign to counteract the effect of habitat loss by encouraging residents to make a home for a nuthatch. Placing nest boxes in backyards worked to conserve the Eastern Bluebird, and adding 10,000 nuthatch nest boxes across North Carolina will also help stop the decline of nuthatches in the piedmont.

North Carolina’s piedmont and coastal plain regions encompass 77 Important Bird Areas (IBAs) supporting birds with food and habitat as they nest and raise their babies. The following IBAs are important to the success of Brown-headed Nuthatch populations:

The Brown-headed Nuthatch has been the central focus of the 2014 Bird-Friendly Communities campaign in North Carolina. Learn more about this priority bird and Audubon North Carolina’s work to stop its population decline on our blog.

Through a national climate study, Audubon has identified the Brown-headed Nuthatch as a climate threatened bird. Learn more here.