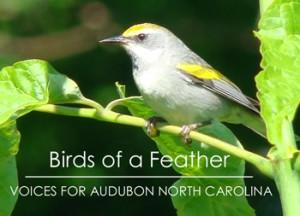 In our special posts “Birds of a Feather – Voices for Audubon North Carolina” we feature stories from our supporters, donors and volunteers. Thank you to our supporters for sharing their stories of how they fell in love with birding, the importance of conservation, and why supporting Audubon is such a critical resource for North Carolina.

Roughly 25 years ago, Audubon North Carolina introduced my wife and me to Battery Island, located near the mouth of the Cape Fear River. It is a small, low spit of land, about six acres, covered with scrubby shrubs and trees, and totally unspectacular and insignificant. 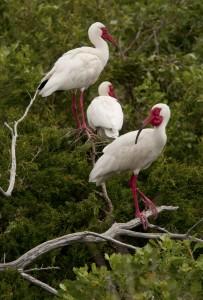 Except that Battery Island is not unspectacular and insignificant to the White Ibis and many other varieties of wading birds and shore birds. The Island is a prime breeding ground for these birds. In most summer breeding seasons, the Island comes alive with thousands of White Ibises incubating eggs and foraging. This one tiny island supports approximately 10% of the North American population of this bird. This year, over 5,000 pairs have nested here. The White Ibis is not the entire story, however. Hundreds of herons and egrets of various stripes also breed on the Island, along with numerous varieties of shore birds and songbirds.

Battery Island is a global resource thanks in large part to early intervention and protection by Audubon North Carolina. Had Audubon not acted to protect and control access to the Island, there would likely be fewer birds, breeding elsewhere under less than optimal conditions.

Protecting Battery Island did not require expenditures of huge sums of money. No one had to lie down in front of bulldozers, or chain himself or herself to a tree. Audubon North Carolina simply went about its business of collecting data to prove the importance of the Island to breeding birds, and then worked in partnership with the US Army Corps of Engineers and NC Wildlife Resources Commission to develop a reasonable plan for protection. The effort did not make headlines, but protecting Battery Island is an event of global significance. 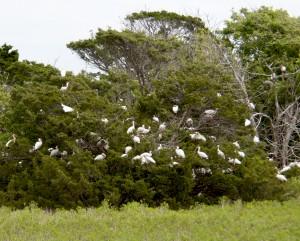 Battery Island is one of several coastal islands that North Carolina Audubon has protected and currently manages for the benefit of breeding shore birds and wading birds. In each case, Audubon saw a potential threat and a corresponding opportunity, and seized the opportunity through good science and collaboration. This is Audubon’s way.